As economies become increasingly digitized and consumer behaviors shift accordingly, banks are under intense pressure to accelerate their digital transformation efforts to keep pace with this broader societal change. Speaking on a recent Banking Transformed podcast, 10x Banking’s Chief Client Officer Leda Glyptis joined host Jim Marous to discuss whether banks are setting the right priorities for this transformation and whether they are moving fast enough.

Here are five key highlights from the podcast:

1. Banks don’t know how broken they are

Banks are largely hamstrung by legacy leadership and a reluctance to rock the boat. “Success does not create change, and so when nothing seems broken, it’s hard to see how broken things are,” Marous says. For instance, customers may still use their legacy bank but also have accounts at other institutions or FinTechs that could eventually replace that legacy bank. “Organizations don’t realize that just because you have the accounts, it doesn’t mean you’re not losing the relationships,” he says. For Glyptis, there are three key factors that are hindering banks on this journey. First, legacy banks have spent the past 15 years assuming they were in charge of how they needed to transform and when. “What they were not used to was rapid change in the economy that would dictate what they needed to do and at what pace,” says Glyptis. Second, banks spent most of their efforts sprucing up systems that were visible to customers or investors rather than the harder-to-rewire bits under the hood. And third, banks have developed bad habits—for example, there is a pervasive cult of busyness, meaning there is no time for the creativity or complex thinking needed to tackle digital transformation head on, Glyptis says.

The emergence of open finance and APIs and data standardization has enabled banks to re-bundle their services and offer them as standalone products either through a banking-as-a-service (BaaS) or embedded finance model. Banks that understand this trend towards platformification—which completely changes the economics of banking and pushes banks further away from the consumer—are the ones that are going to thrive in this new digital world. “Which bank is underpinning your service on top of a BaaS capability, you might not even know,” says Glyptis. One bank that is leading the way is Australia’s Westpac, which has launched a BaaS platform alongside its traditional bank. First-mover advantage is likely to be significant. “The value of a platform is on the size of its ecosystem and the richness of its ecosystem—if you’re playing on top of a platform, you can be on every platform,” says Glyptis. “But if you’re trying to be the platform, as most banks are… how many do you need? It’s not going to be a monopoly, but it’s definitely going to be an oligopoly.”

3. Reimagining the bank of the future will win the hearts of customers

The opportunities for banks to redefine themselves have never been greater. “Banking has been pretty much the same no matter what the organization. They have the same products, same services, maybe a little variance but overall you knew what you were getting, so there was no emotional connection,” says Marous. “I think we’re getting really close to a point where, because of personalization, because of data, because of the ability to go after segments, there is an opportunity to become the Nike of banking.” In other words, a bank brand that customers feel an emotional connection with that goes beyond the transactional banking relationships of the past. That emotional connection can be unlocked if customers believe their bank is working for them. “Banks need to look at themselves and go, I’m either of service, or I’m just in the way,” says Glyptis. “A bank that perceives its purpose as being of service will create an emotional connection.”

In this new world of platform banking, effective change is all about leadership. “The space between being able to do something like this and not being able to do something like this is all about leadership, not technology,” says Glyptis. While there needs to be a deep understanding of how platform economics work, leaders also need the courage to step into the unknown. “In legacy banking, if you do what your predecessors always did, you would safely get the corner office and be very well remunerated—why would you disrupt that?” says Glyptis. “So, you need genuine leadership to say I understand this is complicated and different, but I get it and I am going to venture forth like a leader should.” Bank leaders must also recognize they might not always get things right and be ready to pivot if necessary. That means leaders need to operate from a starting point where they anticipate it is possible for them to be wrong, says Glyptis. “The hierarchical nature of most traditional banks means that people come from a place of if I’m your boss, I’m infallible, and the culture of surfacing these challenges and admitting you’re wrong in a timely manner is not there,” she says.

Technology that supports banks in a real-time digital economy no longer provides a competitive advantage, it is basic hygiene. “If you want to scale and bring truly digital but robust and secure services to the market, you need your plumbing to be solid—but you don’t need to build it yourself,” says Glyptis. Instead, banks need to define their purpose and how they are adding value to that purpose. “Everything else is a utility and you should buy it or partner,” says Glyptis. “The value of what we do at 10x is we create the absolute best-in-class utility for someone who wants to have truly creatively unique digital capabilities on top.” Being able to move fast is essential. Take Chinese tech company Tencent: it has an ideation to implementation time of about 14 days and can test products immediately to see how they work, says Marous. “If you find something wrong, you can fix it quickly and easily,” he says. “Speed of implementation and speed of innovation is so vastly more important now… you fall further and further behind if you overthink a process.”

Watch a replay of the webcast below. 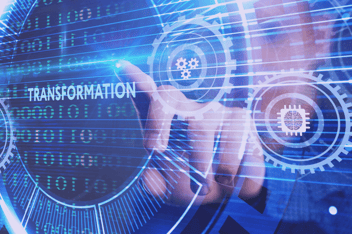 Report - How corporate banks can transform the treasury