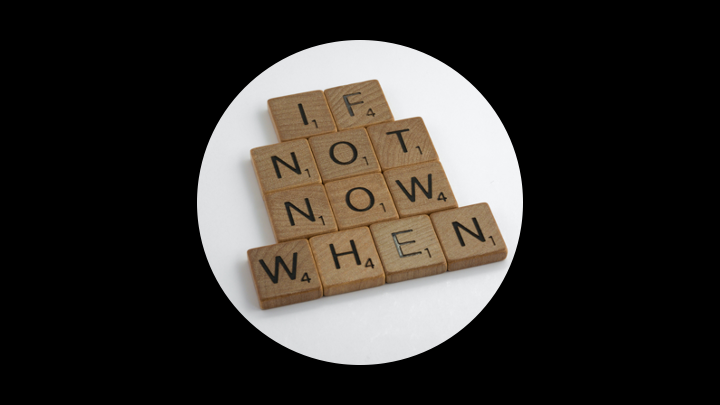 It’s no secret that traditional banks have endured some rough years. Amid COVID-19, low interest rates and supercharged regulatory scrutiny, they’ve been hit with record-breaking customer complaints. What’s more, they’ve had to face some serious new fintech competitors too, in the form of Afterpay, Klarna, Stripe, Wise and more.

Generation Z, who famously grew up with mobile services and instant convenience, are not sympathetic to the plight of banks. Far from it. 83% are now considering moving their combined $3 trillion elsewhere. And frictionless fintechs are all too happy to scoop up the frustrated clientele.

One example is Revolut, whose customer accounts rocketed to 20 million in 2020, a 13-fold increase on 2018. Unlike most incumbent banks, the fintech was able to add sought-after new services and product lines at lightning speed, such as crypto-trading. Another is Monzo, who averaged 55,000 new accounts each week in 2019. The way these challengers attract new customers is not because people trust them more – quite the opposite it would appear!

Even with Monzo’s phenomenal growth in customer numbers – from 1.6m to 3.9m between 2019 to 2020 the average balance on an account fell from £581 to just £358, showing how they still prefer incumbents for their salaries and savings. Nor is it because challenger banks offer superior products. Ultimately, the reason so many customers are driven to them is because of their seamless digital-first processes, which are unrivalled by traditional banks. According to one study, 23% of customers who abandon their traditional bank do so simply because the online interface does not meet their standards.

So, how have traditional banks found themselves in this peculiar situation? And what can they to do retain customer trust, target new segments and generations with different expectations? We spoke with our Director of Product and Engineering Leigh Pepper to discover how technology can be the solution.

Many retail banks ‘trapped in inertia'

Some fifty years ago, traditional banks were the original fintechs. Computers that took up entire rooms were cutting-edge innovations, becoming the foundation of banking as we know it today. It’s estimated that 92 of the world’s 100 banks still rely on mainframes built as far back as 1964.

Over time, new layers of technology – including telephone, website and mobile services - were patched on top of these core systems, resulting in a hotchpotch of dated technology and spaghetti architecture.

To become truly disruptive, these problematic core systems must be replaced. “These systems are acting like a drag on innovation, as they simply can’t handle new products and innovations easily,” Leigh says.

According to him, lifting the lid and endangering the whole system feels like too much of a risk - which explains why progress has been so glacial. “If you are going to take the heart out of a body, you’d better be sure you know what you’re doing!” he says. “It’s not like removing a limb where chances are the patient still survives”.

“Executive leaders can really struggle with those decisions, and then become trapped in inertia”, Leigh comments. This hesitancy, he suspects, is understandably the cause of a lot of the large banks’ internal challenges – and the reason why challenger banks can race ahead. “These are really big, hard decisions and it’s understandable that an executive leader would struggle with these,” says Leigh. “[Managers ask themselves], ‘do I really take a gamble and risk on my career?’ But if they don’t, how can the business move forward. This will be debated in committees and boardrooms across the bank … and ultimately they become trapped in inertia.”

Many banks are not taking advantage of the low-hanging technological fruits, possibly because they feel anchored down by overwhelming and intimidating legacy systems.

Become unstuck by ‘targeting new segments and markets without restraints’

However, it doesn’t have to be this way. In Leigh’s view, there are several avenues to replace flailing existing systems. “Where I’ve seen it work really well, is where banks - such as the ones we’re working with – set something up on the side”, he says. “A highly targeted separate solution, which builds organisational momentum, without any of the constraints of the legacy. This will not only enhance the speed to market but also critically increases the belief and confidence in the organisation too.”

This side play, according to Leigh, is the best way to upgrade an existing core system to challenger-bank-levels without the glitches. “Rather than dealing with the complexity of ripping out some 1980s software frame and all the spaghetti code on top of it, it’s better to build a highly-efficient upgrade from scratch, capture new revenue streams and then explore the best approaches to move it over”, he says. “It’s simpler and much lower risk – and importantly, with new cloud native solutions like SuperCore, it’s very low cost due to the per user and managed service approach.” Front book acquisition on existing products with regular maturity periods such as savings and mortgages are especially ripe for this innovation as are new features like buy-now-pay-later, or entry to new segments and geographies.

Of course, many traditional banks have tried and failed to build an edgy sister fintech. Who can forget the likes of UBS’ SmartWealth, Investec’s Click & Invest or RBS’ Bo, to name a few? Setting up a brand new business, a successful challenger, is not just a matter of deciding to do so. It is hard. Even for those who know how to run a successful business. But it’s exactly this thinking, according to Leigh, which leads banks down the wrong path. They shouldn’t aim to emulate existing fintechs at all. “Go into new segments which are untapped, look at opportunities that are presented by banking as a service,” he says. “Don’t just redo what’s already been done. It needs a real business case for growth and cost reduction behind it”.

Unlike fintechs, traditional banks are uniquely positioned to find these gaps in the market. They have decades of valuable data stored up about retail banking customers. What’s more, they have the experience and expertise to create impressive solutions to problems. Let’s not forget that while neo banks may offer fast and seamless user journeys, for the most part, they are not creating new products. Rather, they tend to recycle the tried-and-tested savings, investments and credit principles first put into motion by banks.

Solve one problem at a time to ‘really drive profitability’

In addition to solving a unique banking need, Leigh recommends keeping the new fintech simple to begin with. “It’s important to accept that these platforms are not going to be absolutely everything from day one.”

To do this, Leigh suggests banks focus on fixing one problem at a time, as they build new fintech software. When it comes to managing the technology, this is the best way to ensure that the system is smooth and seamless. “[Once] the problem has been broken down into something tangible and manageable, banks are able to pick up different pieces and bring them to the new platform bit by bit,” Leigh explains.

There are almost unlimited benefits to embracing core transformation. Customer attraction, retention, increased security, efficiency, and stronger regulatory compliance are just some of many. But one of the most significant advantages, according to Leigh, appears on the balance sheet. “Simplification is what most banks need to really drive profitability,” he says. “It’s complexity which drives costs.”

Research from Accenture reveals that just moving onto the cloud can slash IT costs – estimated to be around £300 million per year for tier 1 banks - by up to 40%. However, other experts believe savings could be as high as 75%. Amounting to hundreds of millions of pounds, this could be the impetus banks need to finally boost profits in a healthy way, as well as increasing customer retention.

These cost savings are only going to increase over time. Switching to cloud technology dramatically cuts down on carbon emissions, which are soon likely to be taxed. What’s more, it offers superior protection against scams and regulatory risks, further protecting assets.

For many traditional bankers, the thought of creating an entirely new operating system may seem a little daunting. But for experienced experts like Leigh and the engineers at 10x, who have now built several such systems it’s replicable and low risk.

For banks looking to drive profitability and embrace digital transformation fully, Leigh has this to say: “You can take the first step to doing this relatively easily.”

Taking half an hour to speak to a specialist banking technology provider is a quick win, which could lead to the prosperity of your entire bank. Has there ever been such a low-risk and high gain investment?

Set up a meeting 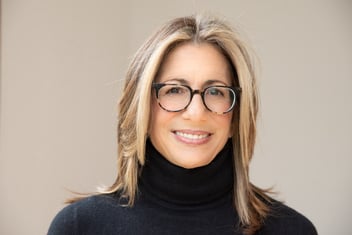 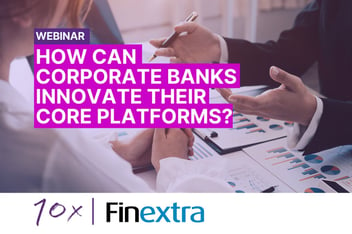 Watch: How can corporate banks innovate their core banking platforms? 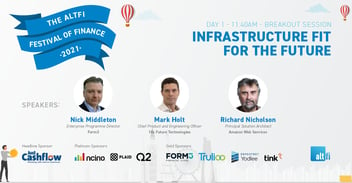 Infrastructure fit for the future